TheTool v.02 is available – this small handy tools now enables networks detection and setting proxy according to which network computer (e.g. notebook) is just connected. Plus has now very flexible system for defining other actions. More on it’s own page.

APEX 4.1 enables to include a download link to LOB object in standard or interactive repors.   Documentation is available  here, however the approach is not so obvious from it.  So here is quick recap, how it works:

END_OF_DOCUMENT_TOKEN_TO_BE_REPLACED

Recently I needed to record some screen-cast from Linux desktop.  In past I was using gtk-recordmydesktop, which basically worked well, but I thought  maybe there is something better.   And I have found this combination of two tools very useful –   Kazam (screencaster) and OpenShot (video editing) . Kazam is easy to use with all basic functions that are needed  (screen area definition, multi-display support, audio source selection) and it supports output into two common formats (MP4, WebM).  When screen-cast is finished Kazam gives you opportunity to open it directly with a video editor – here OpenShot can be used to cut your screen-cast video, add titles etc. and  finalize screen-cast video.  END_OF_DOCUMENT_TOKEN_TO_BE_REPLACED

Debian/Ubuntu do not have bash autocompletion enabled for  root account by default.  When working under root account, this is quite missed feature,   but luckily it can be enabled very easily:

add folowing to the file:

I need to use superuser privileges quite often and not so particular about security, but still want to work mainly under my own user.  The solution is to set sudo not to require password for my user:

add following line to the end:

As noted this is basically a security risk, so apply only if you are sure what you are doing.

Recently I’ve been converting a batch of ebooks into epub and mobi formats.  I used python tools, parts of my project MyBookShelf, which uses calibre and LibreOffice for all the hard work.   The conversion tool enables to run several conversion in parallel – in separate processes.  I wondered how the conversion will speed up with adding more processes.   I ran it  on my notebook with core i5 processor – two physical cores, each core can run two physical threads, 8GB memory. Graph below shows results for conversion of about 10 books into both formats. 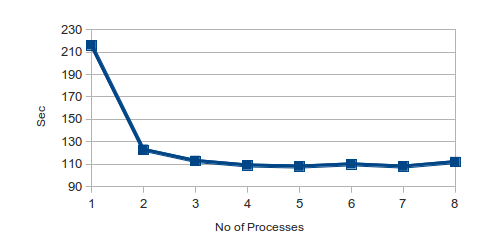 Interesting thing for me is that only notable speed up is between 1 and 2 processes.   Not very much gain with running 3 or 4 –  looks like full utilization of HW threads is held back by I/O or memory speed limits?

Many Latin alphabets (like my native Czech) contain characters with diacritical marks (or can be called accent marks). For some application in computers (like searching, cross systems compatible file names etc.) we would like to remove diacritics and translate  to string containing just ASCII  characters.   Common approach for this is to use UNICODE character decomposition.

Characters decomposition is defined in unicode standard and all common computer languages contains libraries which contain unicode definitions and can decompose characters.  Below Ishow how this can be done in python. END_OF_DOCUMENT_TOKEN_TO_BE_REPLACED

Having heard so much about clouds and ‘Infrastructure as A Service’ recently I decided to try Openstack – complete open source solution for cloud computing.   Openstack is actually a set of softwares, that together provide necessary services for a cloud infrastructure.  Openstack (Essex release) can be installed in virtual machine, Virtual Box in my case, so I gave it a try and here are some of my observations: END_OF_DOCUMENT_TOKEN_TO_BE_REPLACED

After upgrade to  the new version of Linux (Mint 13, which is based on Ubuntu Precise) I’d found that my trackpoint is not working right (on Dell E6410), it was bit unresponsive and movement was not smooth.   Touchpad was generally  OK, but trackpoint really sucked. So I had to look into details of mouse setup in X and I was really surprised how many various parameters are there and how many aspects of mouse behaviour could be modified.   So I’d like to share few tips how to set pointing device – apart of those obvious settings, which are available in desktop settings (Acceleration and Sensitivity).

END_OF_DOCUMENT_TOKEN_TO_BE_REPLACED

In many scenarios it would be nice if we can provide some dynamic actions to report (classical) region, which can be handled via Ajax calls, rather then submitting a whole page  – these actions could include: