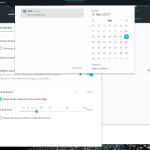 As Canonical has announced the end of Unity desktop I thought it’s time to look again around at Linux desktops. In past years I have been using mainly Gnome 2 (or Mate recently), XFCE, Cinnamon and Unity (yes I did and experience was after all rather positive). I’ve tried Gnome 3 few years ago, but really never gave it longer try and never really find attraction for KDE. So in this article I’ll look a bit at those desktops again and especially at the recent Gnome Shell and it’s customization to my needs (which is indeed based on very individual preferences). END_OF_DOCUMENT_TOKEN_TO_BE_REPLACED

GSetttings is the standard way how Gnome 3 applications store their configuration. GSettings is the front-end interface for application, actual values are stored by back-end – standard one is called dconf. We can then use the tool dconf-editor to easily browse all stored configurations for all applications. Thanks to GObject introspection we can also work easily with GSettings from python. END_OF_DOCUMENT_TOKEN_TO_BE_REPLACED